Seeing With Both Eyes Open

The following is a merging of two posts by Jay Ferris on the same subject with two analogies; seeing Truth with both eyes open, and seeing Truth with a front and rear sight (as in a rifle).  Two witnesses, he explains, are needed for spiritual “depth perception”, and the alignment of these two witnesses is needed for ‘testing the spirits’.  If you prefer to read this longer article offline, click here to open and print a PDF version. 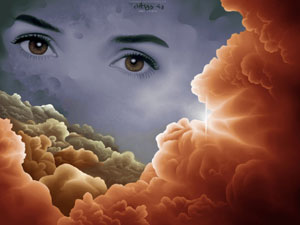 Seeing With Both Eyes Open

There are many who read the Bible with only one eye. They have already been told what it all means, and sure enough, that’s all they can see there. This is basic to most systems, networks, denominations, “church institutions,” and even “non-denominations.” (Perhaps I need to mention that God is Spirit, not a system.)

By looking at things with only one eye, we lose “depth perception.” It takes two eyes to see into anything with any depth. Perhaps by now you have already noticed that the Bible is pretty deep, in fact deep beyond any likelihood of human understanding, at least, this side of the second coming. Reading with two eyes can mean many things, but for the present I would like to examine one aspect of two-eyed reading and understanding. What I want to say here is that we need to read about God with both eyes open, one focused on His word as revealed in the Bible, and the other focused on His word as revealed in the things created, Romans 1:18-20.

If we go through life with only one eye open, we are clueless about the creation.  If we read the bible with only one eye open, we are bound to be religious.  Regarding the link between these two ‘eyes’, Romans chapter one says that if we don’t understand God from His revelation in the things created we are “without excuse,” Romans 1:20.  These two revelations are critical to our understanding of what God is hoping for in relationship to us, and our relationship to each other.

There are many ways to elaborate on this truth.  We could also do it with drawings, and even models.  These can all be understood as illustrative parables.  God, the Creator is in possession of a greater and more powerful parable palette than we are, however.  He is able to illustrate invisible truth by “Creation.”  Sex and money are two very powerful parables that God has built into the things created.  For the present perhaps it is enough to point out that these two go a very long way in helping us to understand relationship, and the medium of exchange relationship requires.

A clear and aligned vision

When The Word became flesh and dwelt for a while among us, a mind-boggling shift took place in our understanding of God or misunderstanding, as the case may be. This paradigm shift did not throw out the then Scriptures, but it did open up a whole new way of understanding them that was set free of religious paradigms. So far from being all about religion, the Scriptures turned out to be all about Jesus, (at least that’s what He told the religious experts of His day). The letters written during the New Testament period went on to talk about the fullness of Him, including He in us, and us in Him. But, almost from the beginning scholars and theologians have dragged a lot of obsolete baggage from the Old Covenant into the New.

Jesus made the old rules and understandings about God obsolete, Hebrews 8:13.  The old rules of understanding God, rather than making us functional, were and remain the cause of our dysfunction, (1 Corinthians 15:56).  Nowhere is this more apparent than in our inablity to live the “more abundant life” that Jesus came to give us, especially in relationship to one another.

In order to understand God, and the things of God we need, at least, two witnesses, both of which are readily available to carnal or fallen man, 1 John 4:1, and 1 John 5:7, 8.  The “spirits must be tested” by both the written word of God and the revelation of God in the things created – not one or the other, but both.  There must be alignment between the two, kind of like front and rear sights of a rifle designed to take aim at the TRUTH of The Spirit.

Natural man does not have the Spirit, but since the printing press and the Internet, he does have the other two witnesses – the written Word, and the Creation. Where the created things are concerned, it is well known, and said that we can “look up and see the stars,” but what I want to focus on here is closer to home.  It is even, and perhaps especially, in the details, things like “male and female in the image of God,” Genesis 1:26, 27.  In its simplest essence this is about relationship.

Both the front & rear sights can be very messed up

There are essentially two audiences for what needs to be said here.  One is made up of unbelievers, who have little or no regard for the written word of God.  The other honors the written word, but has little or no regard for the witness of created things. Neither group seems to appreciate the effect of the windage of the Spirit on the words, John 6:63. Without excuse, the rear sight (the created witness) is all messed for both groups. It is out of line due to the confused paradigms of a polluted culture.

For the most part religious experts and their constituencies haven’t so much as heard there be a rear sight, (created witness) Acts 18:24-19:2. Translators, for instance don’t seem to know the difference between filth and menstruation, Isaiah 64:6.

Sad to say: there is a third witness, a false one, but so imposing it has obscured the revelation in creation. This third witness is what has been calling itself “church.”  That’s enough to mislead even the best of us where God’s intention is concerned.  Paul saw it coming, Acts 20:28-31. He also saw it in action, 1 Corinthians 11:17.

Some years ago now I saw that there are attitudinal doorkeepers in the mind of each of us. These doorkeepers either prevent or blur our ability to see the Truth, whether in the word or in the creation. These doorkeepers are not always so obvious or easy to reach or get past. Some of them take the form of strongholds. Paul provides us with some pretty good lists: Romans 1:29-31, Galatians 5:19-21, 2 Timothy 3:2-5.

Here is a short list of the kind of thing we have in mind here: fear, insecurity, feeling “less than,” wounds, misinformation, especially religious misinformation, denial, repression, especially religious repression, agendas, both hidden and open, ambition, love of preeminence, need to be center stage, spiritual retardation, systems, programs, institutional bondage, and on the list could go. The bottom line of them all is that they don’t understand God from the things created. For instance, rather than seeing Christ and the church, they see sex, and are left hung up on the plumbing.

It is these strongholds that bar or blur the Truth. We need to get better at pulling them down, and we have been given very powerful weapons necessary for doing so, whether in ourselves or in others, 2 Corinthians 10:4.

To print a PDF of this article, click here

Like Loading...
This entry was posted in J.Ferris: Reposts with Notes and tagged Introduction. Bookmark the permalink.

4 Responses to Seeing With Both Eyes Open