The Kingdom of God is Not a Do It Yourself Project 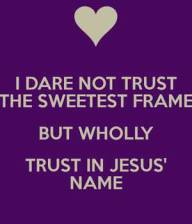 The article that follows called, “Trust and Obey” was written in 1989, but circumstances of late have made clear that we must touch this matter of trusting flesh once again.  Do not trust the flesh. Trust God and Jesus. That’s all.