The Passing of The Keys 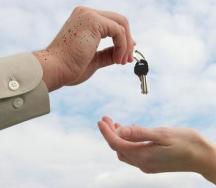 I am dedicating this post to Dale Chapman. It came because of something he shared at a recent Searching Together Conference in Elgin, IL.

In a nutshell what Dale shared is that when it’s time for him to give up his right to drive he will give his keys to his daughter.

Giving up the keys, as well as receiving the keys is a mile-post event in one’s life time. Getting an old person to give up their keys is a very sensitive matter, much more so than many other similar events as old age strips us of our place, function, and prerogatives.

When Jesus gave Peter the keys to the Kingdom, that was a very special moment, Matthew 16:19. While It is not yet clear to me that Jesus didn’t keep a set for Himself, at least it was very special for Peter to have a set of keys of his own.

In Dale’s case, while he had not yet given up the keys, it was somehow very appropriate for me that it was his daughter to whom we would be willing to give them up when she thought it was time. Searching Together is a gender-neutral conversation among believers who are pretty much in agreement that women are every bit as much people who are given to function in the Kingdom as men are. This just to say that it was striking for me that he shared what he did in the context of Searching Together.

More than that, it was very telling in this day when the cutting edge of what has been calling itself “church” is preoccupied with so much discussion of apostolic fathering that is specifically confined to “sons only.” :-/

Beyond that, it was to a daughter, as distinct from a mother, sister or wife, that Dale was prepared to give up his keys. Here we are invited to see that it is not just Dale who is passing along his keys, but they are the keys to Dale’s continuing life in future generations. Our heritage consists every bit as much in the children of our daughters as it does in the children of our sons. I wrote about this sometime back in my discussion of the meaning of “bride” in Song of Songs. The Hebrew original word or root word is also translated “daughter in law.” The meaning at root is “completion.”

What also occurs to me is that the passing of the keys is only one of the more noticeable, not to say “painful” stripping of life’s prerogatives. I am reminded of the women on the porch of the old folks home sharing together about such things. After several of them mentioning; loosing hearing, sight, smell, even tasting, the last one spoke up with, “yes, but I kind of miss my mind.”

In short there are many things in life that fall away in various and unceremonious ways. Others are more pro-active for good or ill. Things that we were once so capable of doing in our youth are no longer so easy, and they either drop away from our capacities or are usurped without a word by those who take our place. In short, they are not such major losses as the passing of the keys, but are still in the wounds of old age, and by right and honor should be handled with some sensitivity, at least by the loved ones of our old age. (A particular mile-post from Tuesday’s with Morrie comes to mind here.)