The Fragrance of Christ- Nard 2 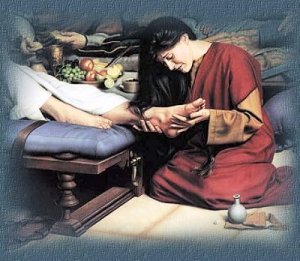 Perhaps I should take a moment and try to tell you about yesterday: (2006)

For Palm Sunday, Carleen was hoping we could play the Sandi Patti version of “The Day He Wore My Crown.” As it was, I played it earlier in the day, but not during our gathering.

Hope asked if she could borrow the tape, and I let her. I played it for Gram and Hope on the way the Charlotte. There is a song on the tape, that has to do with the “…The Rock of revelation…” that “Jesus would build His Kingdom on The Rock of Revelation,” mixing what Jesus said about “His Church,” and The Kingdom of God.

I hit the “off” button at the end of the song, and said to Hope, “Okay time for a pop quiz.”

Here’s where I was coming from:

So, here is the question I asked her: “What is a ‘kingdom?” Her immediate reaction was “deer caught in the headlights.” (She was in the back seat, and I had the rearview mirror positioned so I could see her face. Gram was in the front with me, and very much following the conversation.)

She came up with some kind of answer that was both far out, and far off. So I said, “Let’s break it down into two questions, What is a “dom,” and what is a “King.” We started with “dom”.  What I was after here was distinguishing the “doms” of this world from the “dom” of our Lord and of His Christ.  After a little back and forth, I think we finally got to a place where she understood that the “dom” was not a place in heaven, (Gram’s guess as to it’s location) but in the Spirit, “… righteousness peace and Joy in The Holy Spirit.”  We also got as far as her understanding that it was located inside of her.  Next I asked her about the King, “Where is The King located?”  Clearly another “trick question.” :-\  In explaining to her that the King was also inside of her. (A very convenient, not to say handy place, for Him to be.)  In support of that location, I quoted Paul to the Corinthians: “… Don’t you know that Christ is in you, unless of course you fail the test.”  (Hadn’t intended to scare her, although the “fear of The Lord is the beginning of wisdom.” :-) )

I asked her, “What’s the most important thing to know about This King?” (Apparently another trick question. :-\ ) “He Loves You!!” I went on to explain how much, and the difference between how He loves her, and the kind of love that she has experienced down here. She seemed to be very encouraged. The expression on her face noticeably brightened! :-)

Then I asked her, “How did this King get inside of you?” (Obviously another trick question. :-\ :-) )  Nope, not a clue. This is a girl who just gave a magnificent vocal recital, didn’t miss a note, didn’t forget a word, everything “perfect” comes from a home where “knowing stuff” is the highest value.  Seemed like a really good “test kitchen” to me!

Returning to the song, (O, by the way, I did mention up front that, since we are to “seek the Kingdom first,” it is kind of important that we have some understanding of what a kingdom is, so that we know what we are looking for. Is it me? Or should this not be rocket science?) So, to the song: “… on The Rock of Revelation I will build my Kingdom…” I explained that Jesus is called “The Rock,”1 Corinthians 10:4.

From there, I took her to the “four kingdoms” of Nebuchadnezzar’s dream. She was well familiar with the story, although confused about whose kingdom the gold was. After getting that straightened out, we talked about how those kingdoms come to an end, according to the dream. She remembered, “a rock, not cut out with human hands.” She even remembered that it hit the image on the feet. She also remembered that, having reduced the four kingdoms to powder, the “rock grew into a mighty mountain to fill the whole earth,” Daniel 2:35.

I also talked about a stone from the river, one of the five that David selected, the one with which he slew Goliath. “Right between the eyes,” Yep that’s what it takes.

I asked her about how do “stones grow?” At that point I made the transition to living stones, and The SEED. Of course, from there I spoke to her about DNA, she knew enough that what’s in our genes determines what we turn into. :-)

Spent some time sharing with her about God counting on that SEED in her to make of her exactly what He is after. That He, God, her heavenly Father, is counting on That SEED, and not counting on her for any of it. She just gets to watch, to have “revelation.” That Seed is able, not only to tell her how it’s going to be, but to make sure it comes out the way He says. What a King!!

All she has to remember, especially when things seem to be going wrong either for or in her, that Her King Loves her with an everlasting love!

That pretty much was the conversation in connection with the first “pop quiz.”

I turned on the tape again. A couple of songs went by, and then Sandi Patti sang “The Via Dolorosa.” GREAT SONG!! Got done, shut off the Tape player, and announced, “Pop quiz.” “That day along the Via Dolorosa, people were in the line of march, some on the front row. Question: ‘Of the five senses, how many were probably used to take in all that was happening?”

I had to begin by backing up to ask her what the five senses are. She wasn’t sure, Gram began to explain: “sight, hearing, touch, taste, smell.”

I said, “Not so fast,” and took her to the dinner party earlier in the week. She remembered, but had it all tangled up with the one at Simon the Pharisee’s house, where the sinful woman came in. After getting that straightened out. We spent some time at supper.  What happened, how much nard, where it got dumped.  How Jesus described it’s purpose, how offended the others were, how much that didn’t matter to her. How much more appreciation Jesus had for what Mary did, than what Martha did. The Nard was more important to Him than the supper.  How his appreciation was so great that Jesus said, What Mary did would be remembered everywhere the gospel went. Jesus put her name up on the marquee, along with His own. I mentioned that Jesus probably had no chance for a bath between the Nard, and His arrest. Even if He did, and the nard was on His body in preparation for His burial, washing it off would have been a bad idea.

Then we looked at all that happened to Him after the supper. I asked her about what she thought might be the result if she took a Gardenia, and crushed it in her hand. She knew that would release even more fragrance faster, and more powerfully. I took her through the garden, the contest of wills between Jesus and the will of His Father, how in the midst of that conflict, that time of decision, He sweat blood. I asked her what she thought the effect of sweating might be where the Nard was concerned. She knew the fragrance would be released out of His pores along with the blood and the sweat. I pointed out the contribution that the fragrance of the nard might have been as Jesus struggled with His decision.

I asked her whose perfume it was. She said, “Mary’s.” I said, “No, it was yours! Mary was at that supper in your place, She did what she did to remind Him of you, when he would need to remember it the most.”

We went next to the beating, after stopping there briefly, and asking again about the perfume, We moved onto the crown of thorns, the crown that had been placed on the head of her King. The perfume was there, and then up the Via Dolorosa. We spoke about His dying breath, His head falling on His chest. “Whose perfume did He smell…”… “No, it was yours!”

I about drove off the road. By then I found myself on Route 85 heading in the direction of Charlotte, and had no idea how I got there, I didn’t remember a thing from the time I started the “Pop Quizzes” with Hope. I can only think The Lord took the wheel while I shared. I found myself wondering if this had anything to do with how Philip got translated after explaining Isaiah to The Ethiopian Eunuch.

The Look on Hope’s face was radiant! Groovy Gram wasn’t looking so bad either. :-)

The Shepherd’s meeting began much as it had the week before. Once again I was quiet for almost an hour and half, listening. Suddenly it went in a direction that seemed designed as an invitation and introduction for my sharing what I had just experienced on the road to Charlotte. They got to talking about emotions, and trembling, and being over taken, and overcome by the Lord.

I shared what happened in a more abbreviated form than I have just written to you, and when I shared, “The perfume was yours” you could feel the place shake. The Lord had been merciful, and the right words came in the right amount, so that in the moment, at least, they “got it!”