The Unlimited Liability of Jesus’ Home 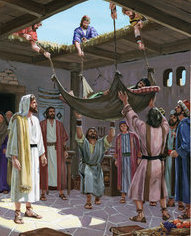 Where the “cost” of following Jesus is concerned, you may remember He once said to a young man who wanted to follow Him, “Foxes have holes and birds of the air have nests, but the Son of Man has no place to lay his head.”(1)

Surely, having no place to live is a great cost, so great that most of us can dismiss the idea as not having relevance for us today. In seeming contrast to this verse, however, how many of us noticed that Jesus DID have a home?

“When Jesus again entered Capernaum, the people heard that he had come home. So many gathered that there was no room left, not even outside the door, and he preached the word to them. Some men came, bringing to him a paralytic, carried by four of them. Since they could not get him to Jesus because of the crowd, they made an opening in the roof above Jesus and, after digging through it, lowered the mat the paralyzed man was lying on. When Jesus saw their faith, he said to the paralytic, “Son, your sins are forgiven.” (3)

Whether or not Jesus or His family owned the house, rented the house, or were more or less extended house guests, it is clear that there was a place in Capernaum called “home”, and it apparently included a house.

Now before Jesus went to this location, however, He was in next door Nazareth where He was raised. It was here that He announced His anointed purpose in the local synagogue.

“He went to Nazareth, where he had been brought up … ”The Spirit of the Lord is on me, because he has anointed me to preach good news to the poor. He has sent me to proclaim freedom for the prisoners and recovery of sight for the blind, to release the oppressed, to proclaim the year of the Lord’s favor.” (5)

It was after this that Jesus went to the next town, even to the house where He was then living.  And it was here that the man was lowered through the roof.

Obviously Jesus’ agenda of bringing the good news and setting people free was one that He not intend to accomplish in an institutional context. His lifestyle, and that of the early Church gave evidence that it was not His heart to institutionalize people, but to meet them in their brokenness and transform their lives in a vital community of faith. He brought His work home with Him, one consequence of which was that the roof was torn off of the house where He was staying.

Our point for present purposes is that having a home does not disqualify us from following Jesus. The important thing is our attitude about the things we possess, even the place where we live. If our homes are not going to be off limits to the agenda of Jesus, then we must face up to the cost. Jesus wants to accomplish His purpose from house to house. This means opening our homes, our families, and our lives, to poor, broken and oppressed people, and broken people break things. In their desperation they, and/or their friends have even been known to tear the roof off.

Are we ready for this? Are we ready for unlimited liability? Or would we prefer to go on touching lives at the relatively safe distance of our institutional programs, churches, and buildings?  I need to confess that I do not lose much sleep contrasting my own ministry to that others, that of Mother Teresa, for instance. My problems of conscience come from what I am doing or not doing in my own home.

Having flirted with His purpose in the past, it is clear that isolated individuals and families are quickly overwhelmed by the enormity of the task and the world’s response to even limited success.   As a result there are more broken people than occasional even semi-sold-out saints can handle. Making the effort, one quickly discovers why, in so many cases, those who take The Lord seriously do so by appointment, some place else, and for earthly compensation.

It is still my hope that a vital community of faith could both risk, and actually walk in the heart of Jesus.

Isn’t it time for the nets, torn by our institutions, to be mended, and the limits of liability be removed from the Church? Isn’t it time for “church” to cease being something that we do some place else?

4 Responses to The Unlimited Liability of Jesus’ Home