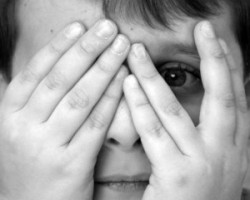 An early letter to a friend by Jay Ferris, regarding a new and obviously life-changing revelation that he had concerning the use of Scripture.  It’s very thought-provoking, and personally I’ve never heard anything like it!  I hope you can take the time to read this…

I’d like to share an interesting revelation that is only now working its way through my life and understanding. It has to do with the use of Scriptures in sharing the gospel.

Recently, as you know, I’ve been working on this manuscript that includes a more personal chapter on relationships that I felt was a necessary addition. My intention in this particular chapter was, and is, to be as transparent and vulnerable as possible.  I was determined to let it all hang out, and I say “determined” because the thought of being that vulnerable was very frightening.  The fear was, and is, the fear of rejection.

I had an increasing sense, however, that I was violating my original intention in this chapter of transparency and vulnerability.  What I realized is that I kept using the Scriptures to support what I was sharing, and the reason I was doing this was so that I could hide behind the Scriptures.  I was hiding behind the Scriptures because of the fear of rejection.  Jesus was despised and rejected. I don’t want to be despised and rejected.  I want to be esteemed and accepted. Talk about, “Who do you think you are?”

Yesterday in a discussion with someone, I found myself wondering about Jesus’ style of ministry, and  if He had used the Scriptures as I was using them.  I have not had the opportunity to make a thorough investigation yet, but it is now my impression that this is not at all the way Jesus ministered.

In his skirmish with the Devil, Jesus used the Scriptures to defend Himself, but that was war. Jesus is the Prince of Peace.  In the Beatitudes He repeatedly said, “It is written…” but then went on to say, “But I tell you….”  When confronted by the Pharisees He quoted Scripture, but again that was war.  The Scriptures are a weapon, our only offensive weapon. We only need weapons when we are at war.  When we are at peace we can be vulnerable. If I am making love to my wife, I don’t come with all guns blazing. Neither is appropriate when dealing with the lost or the young.  Make no mistake.  I think you know well enough that I am armed and dangerous.  But that is not the way I want to come across.  For years I have joked about wearing pink to leaders meetings to keep them from being too threatened.  I don’t want to be seen as a threat, but as a lover.

Jesus may have “only said the things His Father said,” but it did not come out of Him in the form of Bible verses. We use the phrase, “What I am saying is…” and we go on to say what we have already said, but in different words.  This I believe, is who Jesus was.  Jesus was what the Father was saying, but in different words.  And if challenged Jesus could use the Scripture to explain Himself, but He did not come to us as Scripture, He came to us as life and love, and asks us to go to others the same way.

Those who are being saved will respond to, and be drawn by our transparency. Most will not, but that’s our Father’s problem, not ours.  He is not troubled about it, He laughs. If only we too could go forth in tears, that we might enter into His laughter.  If only we too could be like Him in His death, that we too might attain to the resurrection of the dead.  More and more in recent months I have found myself saying what The Father is saying, but in different words, and without conscious effort.  It’s awesome, and it’s terrifying all at once. A person could get hurt doing this sort of thing.

It is at the point of relationship that this becomes particularly problematic. Jesus said of those that the Father had given Him, that He “kept” them while He was in the world, John 17:12. That’s my Father’s heart, and my heart. My heart is increasingly broken as I think of inviting others into this same vulnerability.  It is one thing to have faith that He can save and protect me. It is a bit more of a stretch to have faith that He will save and protect those who he has made mine from the fallout of my humiliation.

As I recently wrote to a friend:

… As you know in those early days when people met in our home, the transparency and vulnerability was greatly increased. Unfortunately when people who were like older brothers and sisters, aunts and uncles, even second parents walked away because of pressure coming from the institutionalized leaders and saints around us, my children had a hard time understanding and became gun shy. I do take some comfort, however, in knowing that no one is going to sell them any snake oil in the name of The Lord.

But, it was not just my flesh and blood children, but some of my spiritual children as well. At this point just about all of them have come back in the Spirit, but in-between then and now there were many years of alienation and estrangement. Currently I am looking down the same gun barrel once again, and it breaks my heart to see my children hurt so. For this reason I “make every effort to maintain the unity of the Spirit in the bond of peace,” and as for my part, “to be at peace with all men.””

Perhaps that is enough to give you some sense of what I am feeling at this point.  I am wrestling with going back over what I have written, and getting rid of most, if not all the references and footnotes.  The problem is, that the religious will see the passion and the intimacy that I have experienced, and into which I am inviting others, as something illegal.  That’s what happened to Jesus.  When the leadership got in His face about it, He then blasted them with Scripture.  At least right now, that is the way it looks to me.

Like Loading...
This entry was posted in J.Ferris: New Releases, J.Ferris: Reposts with Notes, J.Ferris: Warfare against Intimacy and Conversation. Bookmark the permalink.

6 Responses to Hiding Behind Scripture