The Champagne of Intimacy

Posted on December 11, 2012 by LovingLikeGod.com 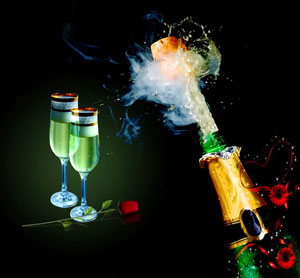 I was thinking about that portion of the desire in the heart of all of us for intimacy. It is kept inside like the pressure in a bottle of Champagne. Suddenly we find ourselves in circumstances where we feel safe to share with others at a deep level. That’s like releasing the wire that holds the cork in the bottle. With the release of the cork comes the celebration of intimacy.

In the moment it seems altogether lovely and wonderful, even intoxicating. In fact according to Tom, and Beverly Rogers, “Neurobiologists have found that there is a chemical released in the brain when a couple falls in love. This chemical is called ‘phenylethylamine’ and it functions in the body much like an amphetamine, thus explaining the superhuman feelings of a couple falling in love. They often make statements like ‘I feel like I can walk on air; I don’t need to eat; The grass is greener;  The sky is bluer.’ Since phenylethylamine is released in the presence of your partner, you want to spend every waking moment with him or her and most couples do just that. Amazingly enough during this stage of their relationship, they never seem to tire of one another.” This is the champagne of intimacy.

Jesus is able to turn water into champagne, so that in, The Spirit we never have to run out.

3 Responses to The Champagne of Intimacy