Posted on October 9, 2012 by LovingLikeGod.com 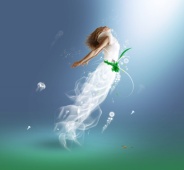 “And I saw a great wonder in heaven…a woman…”

In the past day or so it occurred to me that part of what makes her a wonder in heaven is that she was not always there, like before the foundation of the world, when the “Us” of God was thinking about creating something. The Creator was hoping for something He could not create, and to have what He was hoping for He needed a woman, so He created a man called Adam who was male and female, and had a woman hidden in him. God removed the woman, and, in the fullness of time when she had been made desolate from living under the law, God married her, so that He could have more than one begotten child. Then He put her in His Son just in time for His Son – His only Seed, to die, and multiply into many seeds so that His Father could get what both of them had been hoping for from before the beginning of the world. So now, there she is, the wonder of heaven, a woman who is male and female, because she embodies you and me.

I’m speechless except perhaps to say, “Man! Are we going to have a ball in eternity or WHAT!!” :-)